The first phase of the dedicated freight corridor, Indian Railway’s much-awaited project, is ready.Officials of the Dedicated Freight Corridor Corporation of India Ltd (DFCCIL), under the ministry of railways, have requested the Prime minister Narendra Modi to inaugurate the project.

The 3,300km long twin freight corridors, connecting Dadri in Uttar Pradesh with Mumbai and Ludhiana in Punjab with Howrah in West Bengal, is expected to be complete by end of 2021. Project has already missed several deadlines after its launch in 2006. While the western sector will be connecting all major ports, including Mumbai, Kandla, Pipavav and Mundra, the eastern corridor will connect most coal fields. 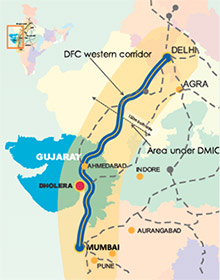 “Nearly 1,000km of freight corridor is almost ready. We have approached the prime minister’s office, requesting for a suitable date for its inauguration. We are expecting it to be inaugurated before the end of next month,” Anurag Sachan, managing director of DFCCIL, told THE WEEK.

The World Bank and Japan International Cooperation Agency (JICA) are financing the project which has total cost of Rs 81,459 crore. While the World Bank is aiding the eastern dedicated freight corridor with $1.86 billion, JICA is offering $5.2 billion for the western corridor.

In the first phase, 64km of track between Rewari to Palanpur in western freight corridor is almost completed, and 351km between Khurja to Bhaupur in eastern corridor is ready for formal inauguration, as trial trains are being successfully run on these tracks.

Indian Railways has been losing market share to road transport because of inadequate and poor service, exacerbated by the need to fit freight trains into busy passenger service schedule. As a result, most of India’s passengers and the bulk of freight go by road. According to an estimate by the railways, currently 90 per cent of India’s passengers traffic and 65 per cent of its freight uses road transportation.

“In 1970, railway was carrying nearly 86 per cent of the total freight volume, which has now come down to 33 per cent. On the other hand, freight traffic by road has jumped from 14 per cent to 59 per cent,” Sachan said, while comparing with countries like China and United States, where railway freight share is 47 per cent and 48 per cent respectively. He felt that the ideal ratio of freight transport by rail and road should be in 50-50 per cent.

India is placed at fourth position in the world in railway freight traffic after China, US and Russia.

Delayed delivery of freight is playing a major role in decline of business. Average speed of a goods train is 25km per hour, as it does not get priority over passenger trains. But officials are hopeful that once completed, at least 70 per cent of the freight trains will be transferred on the dedicated corridor network which will help in timely movement of cargo. On the dedicated fright corridor, Indian Railways is working towards heavy haul trains.

“Seventy per cent of Indian Railways traffic will be transferred to dedicated freight corridor, which will leave lot of capacity for the railway to run their passenger trains much faster. Efforts are already on to maximise the speed of passenger trains. So, it is a win-win situation for railways,” Sachan added