Gujarat, known for centuries for trade and commerce, has now become the most preferred destination for investment under the guidance of Prime Minister Shri Narendrabhai. The State Government and NICDC have formed a Special Purpose Vehicle for the effective development of Dholera SIR, which falls within the sphere of influence of DMIC. Due to strategic location and multi-modal connectivity, Industrial Corridor Project and P.M. Dholera will play a leading role in the Gati Shakti National Master Plan. 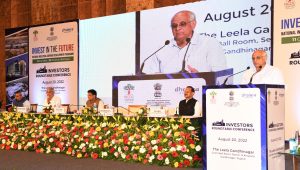 Land acquisition for Dholera-Bhimnath railway project will be completed in next 6 months.

The Chief Minister Mr. Bhupendra Patel has clearly stated that Gholera SIR Futuristic City spread over 900 square kilometers is poised to become the most advanced industrial hub in Gujarat and India in the future. In this context he said that a special purpose vehicle named Dholera Industrial City Development Limited has been formed by the Government of Gujarat and NICDC for the development of Dholera SIR. The Chief Minister was addressing the Investors Round Table Conference organized by the Central Government’s National Industrial Corridor Development Corporation NICDC in Gandhinagar.

Chief Minister Shri Bhupendra Patel said that Gujarat, which has been known for centuries for trade and culture, has now become the most preferred destination for investment as a result of the success of vibrant summits and comprehensive development under the guidance of Prime Minister Shri Narendra Modi. He said that Gujarat was contributing to making India an economic superpower under

industrial metrics of the Government of India such as Ease of Doing Business, Logistics Performance Index, the direction of the Prime Minister, even at a time when the global recession was having an adverse effect in the country and the world. 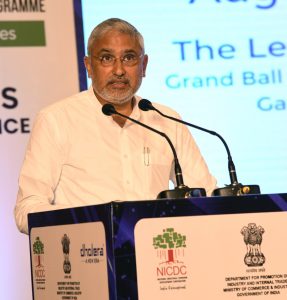 Shri Bhupendra Patel added that Gujarat has been established as a policy driven state and investor friendly state under the leadership of the Prime Minister. Not only this, Gujarat has been at the top for many years in various Export Readiness Index, Startup Ranking etc.

Among the 8 such SIRs planned in Gujarat, Dholera, Mandal, Becharaji and PCPIR are at the most advanced stage of development and also fall within the influence area of ​​the Delhi-Mumbai Industrial Corridor. Dholera Industrial City is one such flagship project and international-level-world-class infrastructure facilities are being developed there, he added.

Elaborating on this, the Chief Minister said that the construction of the Ahmedabad-Dholera Expressway under the Bharatmala project by the National Highway Authority of India is in progress, the land acquisition for the Dholera-Bhimnath railway project will be completed in the next 6 months and also for the international airport in Dholera. has been approved.

The Chief Minister expressed confidence that Dholera plug and play facilities, strategic location and multi-modal connectivity in the Industrial Corridor Project, which is important for ‘Atmanirbhar Bharat’, this corridor project as well as P.M. Gati Shakti will also play a leading role in the National Master Plan.

He called upon the industry-investors to come for business-business in Dholera SIR to make India a developed nation of the world in the amrit period of the country on the occasion of Amrit Mohotsav of Azadi.

Union Minister of Commerce and Industry, Shri Piyush Goyal, while congratulating the citizens of Gujarat on Janmashtami Parva, said that the country is celebrating Amrit Mohotsav of Independence today under the leadership of Prime Minister Shri Narendrabhai Modi. Recently the ‘Har Ghar Tiranga’ campaign has been successful across the country, every countryman has waved the tricolor as a group and given the message of country’s unity to the whole world, which the world has noticed is a matter of pride for all the countrymen.

He said that Prime Minister Shri Narendrabhai Modi has resolved to build a developed country from the ramparts of the Red Fort on the day of Independence Day and when the countrymen have become determined, he expressed confidence that no force in the world can stop India from becoming a developed country.

He added that the countrymen are getting the benefit of the experience of the way Gujarat is developing and has become a developed state today due to his visionary planning and various policies when Prime Minister Shri Narendra Modi was the Chief Minister of Gujarat. The same infrastructure as the infrastructure of Gujarat is being seen across the country today. Gujarat has implemented several policies for industrialists.

Recently, under the guidance of Chief Minister Mr. Bhupendrabhai Patel, Gujarat has announced a Semiconductors Policy which is unprecedented in the country. Not only that, Gujarat is developing at a fast pace today through the IT policy.

He added that the Prime Minister is moving forward with the mantra of holistic and comprehensive development which has resulted in the rise of India’s name around the world and many countries of the world have been attracted by the visionary planning of the Prime Minister. The name of Prime Minister Shri Modi is being discussed today in the list of the best leaders of the world. His leadership has been accepted at the global level which shows that India has become a developed country today.He expressed the firm belief that India will move forward with development and faith in the next 25 years, if all the countrymen are determined, surely no one can stop our country from becoming a world guru.

He added that Prime Minister Shri Narendra Modi’s dream project Dholera is developing at a very fast pace today. He congratulated the entire team of Gujarat including the Chief Minister and said that capital investment of billions of rupees is coming for the development of Dholera. There will be development up to and in which the six lane national highway from Ahmedabad to Dholera and the world’s largest international airport are going to be built.

Both these projects will start in the year-2024. Various infrastructure facilities are to be constructed at Dholera. In which electricity, water, recycled water plant and smart city are envisioned, which will become the largest best manufacturing investment zone in the world as soon as Dholera-SIR is realized. He added that Dholera will grow at a faster pace than the way Gujarat is progressing.

He added that Gujarat is progressing at a faster pace in terms of ease of doing business and manufacturing. Achieving new dimensions of development. With ecosystem, fast-track policies, online approval and CMdashboard being a unique medium for business in Gujarat, monitoring of all activities online is speeding up the progress along with transparency.

He added, I am confident that delegations from various states including countries around the world will come in the near future to witness the development of Dholera-SIR to become the world’s first greenfield smart city.

Mr. Goyal added that Prime Minister’s visionary PM-Gati Shakti National Infrastructure Master Plan is a wonderful idea which includes around 1000 different geo spatial maps of forest, wild life, highways, power plants and 927 maps of different states as well. The entire country has been inter-connected through special mapping in Biseg through planning, which will enable future infrastructure to be developed in a planned manner. Gati Shakti Master Plan will enable construction of roads, highways and railway tracks with pre-planning.

Stating that the government led by the Prime Minister is ready for the country to move forward in the export sector, the minister said that in the year-2021, India will spend Rs. 50 lakh crores which is the highest and our target is to export up to two trillion dollars in the next 7-8 years in which one trillion dollars will be concentrated in the service sector and another trillion dollars in merchandise exports. The National Logistic Policy will also be announced by the central government soon.

The minister said that Gujarat has envisioned different industrial parks. At present, we the people along with the Prime Minister have decided to approve seven textile parks in the country. Gujarat’s Navsari proposal was given number one ranking among the proposals from across the country, from which it can be estimated that Gujarat is determined to develop in different sectors at a fast pace.

Minister of State for Cooperation Mr. Jagdish Vishwakarma welcomed the Dholera SIR Round Table Conference and said that as a result of the visionary planning and developmental politics of the Prime Minister Mr. Narendrabhai Modi, Gujarat is proving to be a developed state of the country today. Dholera SIR is a foundational project to make India self-reliant through Prime Minister’s Make in India and Start Up India initiatives.

Gujarat’s industrial development journey has been transformed from industrial clusters to industrial estates and special economic zones. For example, as part of the Industrial Corridor, which can be called a change, the Special Investment Region i.e. Dholera SIR has been planned by the Gujarat government. For the development of this place, the central government and the state government are taking appropriate steps and the work of its development is being carried forward.

The minister added that Dholera SIR, known as the dream project of Prime Minister Shri Narendrabhai Modi, was announced in the year 2009. Which is being pushed forward today under the leadership of Chief Minister Mr. Bhupendrabhai Patel. The state and the central government are continuously working together. And keeping in mind the demand and experience of the investors, all the people are being provided with the facilities as per their requirement. Today, Prime Minister Shri Narendrabhai Modi has opened the doors of investment in India to all investors of the world.

The minister added that the whole world was struggling against the corona epidemic. Then our Prime Minister Shri Narendrabhai Modi cherished the dream of a self-reliant India and called upon all the citizens to become self-reliant. The Gujarat government is ready to fulfill the dream projects like Make in India and Vocal for Local under Atmanirbhar Bharat.

Mr. Amritlal Meena, Special Secretary for Logistics to the Government of India and CEO and MD of NICDC, while delivering the welcome speech, said that under the guidance of the Minister of Commerce and Industry, the National Industrial Development Corporation is developing world-class model industrial cities across the country. So far 4 industrial cities have been developed which include Dholera, Orik, Vikram Udyogpuri and Greater Noida. The central government has given permission to develop 32 such cities in 18 states.

Prime Minister Shri Narendrabhai Modi has also launched PM Gati Shakti National Master Plan to provide multimodal connectivity. This is a unique model of development where a special purpose vehicle is created with 50-50 percent share of the central and state governments. Policy measures have been advised by the Union Minister to facilitate investors to get land on lease, at a reasonable price including payment terms. So far 201 allottee have acquired land in these 4 industrial townships. We are in touch with them to help with various approvals and resolve their issues,” he added.