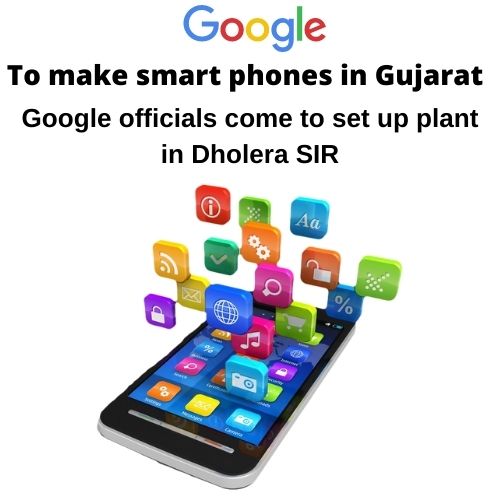 Reliance has recently launched a smartphone in association with Google

At the 44th Annual General Meeting of Reliance Industries, Group Chairman Mukesh Ambani has announced the new Geophone Next, a new smartphone built in partnership with Reliance Jio and Google. According to high-ranking Gujarat government sources, Google may manufacture the smartphone in Gujarat. Not long ago Google officials also came to see the location in the state.

A government official familiar with the matter said on condition of anonymity that some Google officials had recently arrived in Gujarat. He visited Dholera Special Investment Region (Dholera SIR).

However, the matter has not progressed yet. Infrastructure work in Dholera is more than 80% complete and the government is now aggressively promoting it.

No big company has invested in Gujarat after Corona Pandemic.

According to experts, no big company has invested in Gujarat since the arrival of Corona. The Vibrant Gujarat Investment Summit has not been held this year due to Covid.

The state government will also make efforts to bring Google into the state in all these situations. There is no discussion yet on how much Google can invest in Gujarat.

The Google-Jio smartphone is designed for India only

Sundar Pichai, Google’s Chief Executive Officer, said about the new smartphone at AGM that our next step is to start with the reasonable spirit Jio smartphone created by Google and Jio.

Jio smartphone is made for India and this phone will open up new possibilities for millions of people who will be using the internet for the first time. A new 5G partnership between Google Cloud and Jio will help connect more than a billion Indians to the Internet faster.

Even amid the corona-ridden economy, Reliance Industries’ digital arm Jio platforms cost an estimated Rs. 1.5 lakh crore was invested. In July last year, Google also raised Rs. 33,737 crore and acquired a 7.73% stake in the company. This investment is worth Rs. It is the second largest investment after Rs 45,000 crore.

Sales will start from Ganesh Chaturthi day in September

The Android-based operating system of this smartphone has been developed by Jio and Google. Mukesh Ambani announced that the new smartphone has been designed keeping in mind the budget of the common man. The price will be very reasonable and it will go on sale on September 10, Ganesh Chaturthi. “Our goal is to make the country 2G free and 5G free,” Ambani said.

Advantages of Investing in Plots in India