Dholera will become the most state-of-the-art smart industrial city of the future.

Gandhinagar. Chief Minister Bhupendra Patel on Wednesday through video conferencing called upon the global platform of Dubai-Expo-2020 to encourage entrepreneurs and investors from across the world to expand their business in Gujarat and get involved in global business development. He said that Dholera would become the most state-of-the-art industrial city of the future. He showcased the features of the Green Field Industrial City Dholera Sir at the Indian Pavilion Dholera Sir (SIR) at the Dubai Expo. ‘Dholera Pioneering Smart Industrial Development’ at this expo.

He said that the policy is committed to attract investors from India and abroad to Gujarat to fulfill the Prime Minister’s dream of ‘Self-reliant India, ‘Make in India’ with Driven State, better infrastructure and all-round development. At present, Gujarat is discussed and compared with the developed countries of the world.

Gujarat has achieved the highest foreign investment in the country i.e. 37 percent FDI only. Gujarat is ahead in engineering, auto parts, textile, pharmaceutical, chemical and gem and Jewelery sectors. He said that the 1600 km long coastline of Gujarat has become a gateway for maritime trade from Middle-East, Africa and Europe due to one major and 48 non-major ports. 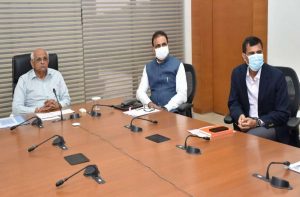 Dholera will become the most state of the art smart industrial city of the future.

Ports have become a gateway for maritime trade from the Middle East, Africa and Europe.

CM Bhupendra Patel made it clear that Gujarat has become the best investment option, in which the contribution of Special Giving details of the features of the Dholera SIR Greenfield Project, Patel said that the project, which is taking shape in an area of ​​920 sq. km, will form a part of the Delhi-Mumbai Industrial Corridor (DMIC) and will have state of the art facilities equipped with next generation technology. A well-planned city will be formed. special Investment Region (SIR-Sir) has been significant.

The Chief Minister said that Dholera SIR has potential for many sectors including aerospace, defence, engineering, IT, electronics and renewable energy. Giving information about the connectivity of Dholera with National and State Highways in the near future, the Chief Minister said that the work of International Airport at Dholera has also started.